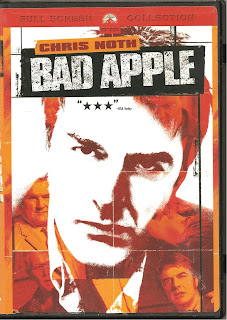 
What Did I Learn?: FBI surveillance agents buy a lot of their stuff from Radio Shack, and a topical anti-septic isn't terribly useful against a bad toothache.


You Might Like This Movie If: You realize that even trained, professional law enforcement agents aren't always at the top of their game.


Really?: Wow... the criminals in this film sure enjoy taking FBI agents as hostages, don't they? I also had a bit of trouble believing Bells would bother grabbing Tozzi and his girlfriend in order to torture and kill them, when his better course of action would be to get the fuck out of dodge.


Rating: Bad Apple never really crosses the line into bad movie territory, but it certainly isn't great, either. Chris Noth and Colm Meany enjoy some nice buddy chemistry, and the script provides a few laughs here and there, but the storyline stops making sense around the mid-point, just as it devolves into a hostage-taking chase, reminiscent of Big Trouble. 6.5/10 stars.