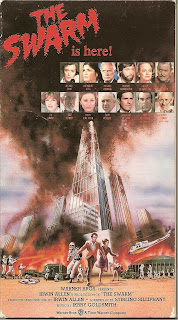 Synopsis: Michael Caine will do anything for a paycheque, example #92

Blurb From the VHS Jacket: “Monsters by the millions – and they’re all for real! They’re coming. There’s no place to hide. All you can do is run for your life... and watch as a living wave of destruction overwhelms everything in its path.”

What Did I Learn?: Bees are nothing but trouble, and need to be wiped off the face of the planet! Oh, wait...

You Might Like This Movie If: You figure than anything dealing with killer bees from the late 1970s has to be a 156-minute long version of this. [Sorry folks, I couldn't find any classic SNL skits on youtube]

Really?: 1) Can a swarm of bees actually invade a building when the doors and windows are shut, let alone an ICBM station? 2) Come to think of it, isn’t it lucky that ICBM station has a science lab our heroes can use to attack the bee threat? 3) So... what’s the deal with the extra-lethal bee sting that comes into effect just after the victim appears to recover? Why the hallucinations, and why does Crane (Caine) know about them? Why does Major Baker worry about Crane uncovering what he called “our work”? I have to wonder if some backstory (i.e. the US government secretly bred Africanized bees as a potential weapon before they escaped) was cut from the final script. 4) Dead children... yeah, that’s just what I wanted to see. Oh, and I guess that whole love triangle between Clarence (Fred MacMurray) Maureen (Olivia de Havilland) and what’s-his-name didn’t mean shit in the end. 5) I don’t think very many elderly scientists would willingly inject themselves with extra-lethal bee venom just to test an experimental antidote.

Rating:  The Swarm might be the nadir of Michael Caine’s movie career, and I can only speculate that Henry Fonda also signed on for a big paycheque. The Swarm combines all of the elements of an Irwin Allen disaster film: terrible dialogue, a highly contrived and difficult-to-believe storyline, and bargain-basement special effects, but it’s not a particularly fun movie, either – small children die, and the audience feels somewhat cheated after investing emotional capital into the lives of the townspeople (I won’t give away any spoilers). 2/10 stars.

Would It Work For a Bad Movie Night?: Yes - take a drink every time Michael Caine yells at some military dick.