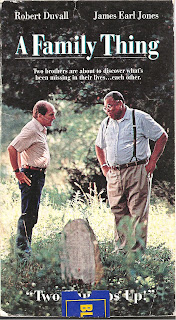 Synopsis: Loveable redneck gets a soulful surprise! [Come to think of it, this film is the Bizarro-Cadence: Robert Duvall arrives at the startling realization that he *is* black.]

Blurb From the VHS Jacket: “Oscar winner Robert Duvall and James Earl Jones star in this uplifting film that touches the heart with remarkable characters, refreshing humor and infectious charm.”

What Did I Learn?: If a bunch of gang-bangers are harassing you in mid-day traffic, it’s not a great idea to step out of your truck in order to confront them. Why the f*** would anyone do that?

Really?: 1) Um... if Earl is supposed to be half-black, was Robert Duvall a good casting choice? And come to think of it, don’t blue eyes come from a recessive gene? If Earl’s mother was 100% African-American (presumably with brown eyes), wouldn’t it have been impossible for him to be born with blue eyes? 2) I realize Earl has lost his wallet and his truck, and he’s had an incredibly shitty week, but I had a hard time believing he would essentially live like a homeless person for a night or so. 3) See “What Did I Learn?”

Rating: Co-written by Billy Bob Thornton(!) A Family Thing is a tad contrived in places (more than a few times I found myself thinking: “real people don’t act this way!”), but it is nice character-driven drama with some important things to say about racism, the need for family, and the ability of love and forgiveness to heal all emotional wounds. Duvall and Jones work well together, but the standout performance in this movie belongs to Irma P. Hall as the indefatigable Aunt T. – she’s great. 8/10 stars.