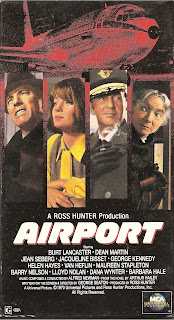 Blurb From the VHS Jacket: “Take a nonstop flight with an all-star cast to  world of tension-filled human drama in this trend-setting box office blockbuster. Based on Arthur Hailey’s runaway bestseller, the emotion-charged adventure stars Burt Lancaster as the manager of a glamorous international airport who must juggle personal crises with professional responsibilities as he attempts to keep his blizzard torn facility open to rescue a bomb-damaged jetliner.”

What Did I Learn?:  1) Um... if your motive is to blow up a transatlantic flight and make your wife a rich widow, you might want to bring some luggage (besides a tightly-gripped attaché case) along, and you probably don’t want to buy your flight insurance right before takeoff. 2) The Boeing 707 can do anything but read. 3) Bored housewives never understand it when real men with real jobs have to stay late to deal with an emergency snowstorm.

You Might Like This Movie If: You firmly believe Dean Martin and airplanes go together like peanut butter and jelly.
Really?: 1) So wait... why couldn’t the plane land in Toronto or Cleveland? Why does it have to return to Chicago, when it’s painfully obvious that isn’t a convenient location? 2) Speaking of “convenient”, isn’t it fortuitous when Mel Bakersfeld’s (Burt Lancaster) admits to an affair, thereby allowing him to  ask out Tanya Livingstone. 3) So wait... Joe Patroni is ordered by Bakersfeld to turn off the 707 engines, and he instead guns them and saves the day. I don’t suppose he gives a shit about keeping his job, or destroying an airplane that’s said to be worth $8 million in 1970 dollars. 4) Gee... even though it's the worst snowstorm in six years, Guerrero's wife (Maureen O'Hara) and Mrs. Bakersfeld seem to have no trouble making to the airport.

Rating: Burt Lancaster apparently called this movie “the worst piece of junk ever made.” Airport isn’t quite that bad, but the dialogue is terrible, the storyline focuses far too much on the personal problems of its characters, and it’s obvious that everyone is trying way too hard. Check it out if you’ve ever wanted to see Lancaster interact with Dean Martin, or if you want to understand the source material for those Airplane! parodies. 5.5/10 stars.