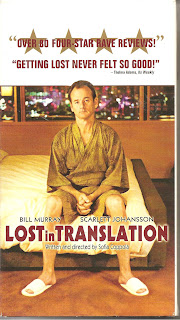 Synopsis: Aging Ghostbuster and bored ingénue demonstrate that feeling lonely and isolated in a foreign country can be a lot of fun.


Blurb From the VHS Jacket: “Bob Harris (Bill Murray) and Charlotte (Scarlett Johansson) are two Americans in Tokyo. Bob is a movie star in town to shoot a whiskey commercial, while Charlotte is a young woman tagging along with her workaholic husband (Giovanni Ribisi). Unable to sleep, Bob and Charlotte cross paths one night in a luxury hotel bar. This chance meeting soon becomes a surprising friendship.”

What Did I Learn?: It's easy to pick up American chicks at a hotel bar if you're the only guy around who speaks English.


Really?: If Bob is a movie star (or at least a somewhat faded one), wouldn't Charlotte's husband and a few more of the Americans recognize him? And do Japanese business executives mind being woken up in the middle of the night by an incoming fax?


Rating: Lost in Translation is a beautiful, thought-provoking film featuring fine chemistry between Bill Murray and Scarlett Johansson, as well as good writing and some incredible cinematography – this easily makes up for Sofia Coppola’s performance in The Godfather Part III. My only complaint would be that while the movie is set in Japan, we never get to know any of the Japanese characters, who are more plot devices than anything else. (Although it’s unlikely Bob and Charlotte would have found each other if they could easily converse with anyone Japanese). Highly recommended. 10/10 stars.