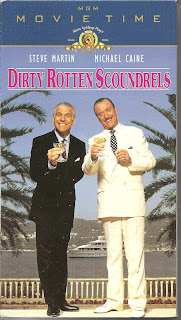 
Blurb From the VHS Jacket: “One’s got a sophisticated, sauve and debonair con act. The other’s got...well, an act. Together, Steve Martin and Michael Caine are Dirty Rotten Scoundrels, and they’re absolutely ruining the Riviera in this ‘wonderfully crafted, absolutely charming, classy, [and] consistently amusing’ (Variety) comedy.”

What Did I Learn?: 1) "A poacher who shoots at rabbits may scare big game away." 2) "To be with another woman, that is French. To be caught, that is American." 3) Marrying a prince isn't such an attractive proposition if he comes with a mentally-disturbed younger brother.


You Might Like This Movie If: You think this is an extremely funny trailer, and you want to see more. (Such a pity that scene never appears in the film itself).


Really?: Dirty Rotten Scoundrels is a light-hearted comedy, and not meant to be taken all that seriously. I can overlook some of the ridiculous cons and counter-cons, but I had a bit of trouble believing a middle-aged man (Martin) would put up with even half of Jamieson's (Caine) bullshit. The part of Freddie would have been a bit more credible had it been cast with a younger actor.


Rating: Best remembered for Steve Martin's short-but-incredible, tour-de-force performance as "Ruprecht", Dirty Rotten Scoundrels is an enjoyable little comedy with a number of funny scenes. While Martin and Caine share some genuine comedic chemistry, watch for Ian McDiarmid (aka Emperor Palpatine from the Star Wars movies) as Jamieson's acid-tongued butler - he delivers some of the movie's best lines. 8/10 stars.