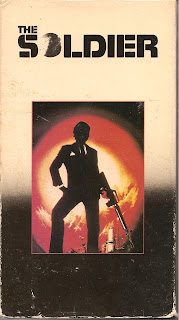 
Blurb From the VHS Jacket: “There is nothing uniform about THE SOLDIER. When the Russians hold the world at ransom with a pile of stolen plutonium, the soldier’s response is unorthodox, uncompromising and unauthorized.”


What Did I Learn?: If the Russians have you over a barrel, your best course of action is to...um... threaten the world with nuclear annihilation unless they back down? WTF?


You Might Like This Movie If: You've always wanted to see the film that catapulted Ken Wahl into action-movie superstardom, and led to...um... Omega Syndrome?


Really?: Wow...where do I begin? I had a bit of trouble believing: a)  a CIA agent would be forced to break into the US embassy in West Berlin in order to report back to his Director, b) that a Soviet agent could infiltrate the office of the CIA Director and blow him up with an explosive lightbulb, c) that anyone could perform an Olympic-style ski jump while simultaneously wasting a pursuer with a Mac-10 submachine gun (see the 1:25 minute mark), etc...


Rating: Featuring a pre-Wiseguy Ken Wahl (who also starred with Paul Newman in Fort Apache, The Bronx), as the title character, The Soldier is an impressive failure of spy movie. Some of the action sequences - especially the ski chase - are quite spectacular, and I loved the Tangerine Dream soundtrack. Alas, the storyline is somehow both simplistic and overly-convoluted, the low-budget effects cheapen the overall look of the film, and the ending is a disappointment. Check it out for shits and giggles - and for scenes of Toronto, over thirty years ago. 5/10 stars.

Would It Work For a Bad Movie Night?: Take a drink every time a vehicle explodes, or a gratuitous fight scene commences.