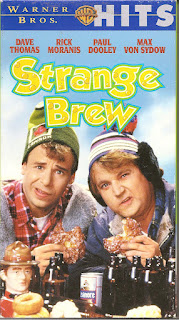 
Blurb From the VHS Jacket: “What matters most in life, eh? Hockey, donuts and beer? A slab of back bacon? And did we mention beer?”


What Did I Learn?: Donuts can be used to bribe dogs or secretaries.


You Might Like This Movie If: This is your favourite song. (I know, I know...it's a little obvious)


Really?: I could ask what purpose the black-and-white hockey teams served (or why somebody would store easily-breakable cases of beer on hockey arena ice), or how the ghost of John Elsinore somehow survived as a computer program to serve as a (literal!) Deus ex machina, but Strange Brew isn’t meant to be taken all that seriously. Instead, I’ll say it’s a bit strange that Thomas and Moranis couldn’t round up any other SCTV alumni for this film. Come on...were Andrea Martin or Joe Flaherty really that busy in 1983?


Rating: How does one review an iconic Canadian film like Strange Brew? The plot has some obvious problems, and the production values are decidedly low-budget, but the movie delivers some solid (if rather low-brow) laughs, and it does evoke some nostalgic memories for my generation. I think the biggest problem with Strange Brew is the same one that’s apparent in any number of Saturday Night Live-related movies: sketch characters don’t always lend themselves to feature films. Two or three minutes of Bob and Doug equals "funny"; 91 minutes, not so much. Save this flick for a BAD MOVIE NIGHT with friends. In the meantime, take off, eh! 5/10 stars.


Would it Work For a Bad Movie Night?: Yes