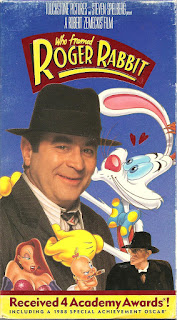 Note: I didn’t mean to make this a Bob Hoskins double feature after Last Orders – it just happened that way.


Blurb From the VHS Jacket: “Once in a generation a film like this comes along.”


What Did I Learn?: 1) Bugs Bunny is a real dick when you’re in trouble. 2) It is pretty tough to resist adding the last two knocks to ‘Shave and a Haircut’.


You Might Like This Movie If: You’ve always wanted to watch a more upbeat version of this famous song.


Really?: In the opening cartoon, I had a great deal of trouble believing that any sane mother would leave her infant child in Roger’s care.


Rating: Who Framed Roger Rabbit is a fun, clever, and zany combination of animation and live action. Bob Hoskins and Christopher Lloyd are magnificently over the top, the special effects are impressive, and it’s pretty cool to watch Disney and Warner Brothers characters on-screen simultaneously. My big complaint is Roger himself; imagine spending 104 minutes with a hyperactive village idiot, and you’ll understand why I can’t give this film a better rating – I wanted to strangle that dumb bunny on more than one occasion. 7/10 stars.