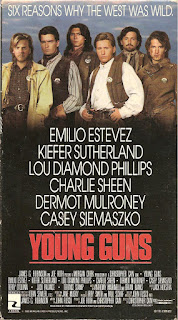 
Blurb From the VHS Jacket: “The year is 1878, Lincoln County. John Tunstall (TERRENCE STAMP), a British ranchowner, hires six rebellious boys as ‘regulators’ to protect his ranch against the ruthless Santa Fe Ring. When Tunstall is killed in an ambush, the Regulators, led by the wild-tempered Billy (EMILIO ESTEVEZ) declare war on the Ring. As their vendetta turns into a bloody rampage, they are branded outlaws, becoming the objects of the largest manhunt in Western history – now riding against staggering odds.”


What Did I Learn?: When your gang is holed up in a farmhouse, surrounded by the army on every side, a volley of bullets is a likely outcome if you address their commanding officer as “Colonel Shithead.”


You Might Like This Movie If: You believe Director Christopher Cain made a good decision by not using this song for the opening credits.


Really?: 1) Why are all the villains middle-aged and overweight? 2) Why does Dick Brewer (Charlie Sheen) keep ordering Billy the Kid (Emilio Estevez) to perform assignments that require a bit of common sense even though it's obvious the guy is a trigger-happy psychopath? 2) So wait...Charlie Sheen plays the mature and responsible young gun?


Rating: Young Guns is a fun Western with an impressive cast, although I have a couple of big complaints: a) it’s difficult not to view this film as a Brat Pack Western, and b) the film should have been more character-driven and focused on Billy’s obvious descent into villainy; instead, Jack Palance’s Lawrence Murphy is presented as cartoonishly evil, and Billy seems in comparison like a mischievous, but lovable lunatic. 6/10 stars.