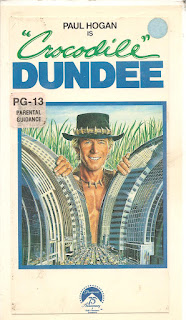 
Synopsis: He was Australia’s most embarrassing export until Mel Gibson could no longer hold his liquor.


Blurb From the VHS Jacket: “Paul Hogan’s endearing performance made Crocodile Dundee the biggest box office comedy smash of 1986! ‘Crocodile’ Dundee (Hogan) is a free spirited Australian who hunts crocodiles with his bare hands, stares down giant water buffaloes, and drinks mere mortals under the table. But he’s about to face the ultimate torture test – a trip to New York City.”


What Did I Learn?: A smarmy newspaper editor doesn’t stand a chance against a rugged Aussie poacher when it comes to romancing a cute reporter.


You Might Like This Movie If: You know that Paul Hogan basically plays the same character in everything he does, and you’re ok with that.


Really?: 1) I’m sure that any drunk poacher would be fooled by the sight of an upright kangaroo firing a high-powered rifle. 2) I realize New York City was still a rough place in 1986, but were there really criminals behind every corner? Dundee beats up a purse-snatcher, a gang of muggers, a pimp and his buddies (on two occasions!), while Sue knees some subway creep in the groin. 3) I had a bit of trouble believing old crockers would seriously grab a transvestite’s nuts.


Rating: “Crocodile” Dundee is a mildly amusing and surprisingly dated relic from the mid-1980s. Paul Hogan mugs his way through this movie, while none of the other actors provide memorable performances. It’s ok for a Sunday afternoon, but otherwise, meh. 6.5/10 stars.