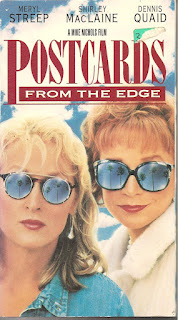 Hmm...this could have worked for my salute to addiction movies.


Blurb From the VHS Jacket: “Based on actress Carrie Fisher’s best-selling autobiographical novel, POSTCARDS FROM THE EDGE is a wickedly witty expose of life in the Hollywood fast lane. In a brilliant comic performance, Meryl Streep stars as Suzanne Vale, a wise-cracking, vulnerable actress determined to jump-start her failing career. As her aging movie star mother, Shirley MacLaine offers the definitive portrait of Hollywood’s gusty glamour queens in scenes spiked with razor-edged humour and searing honesty.”


What Did I Learn?: Ladies, if you suffer from a drug overdose during a wild weekend, and the dude who takes you to the hospital basically dumps you off without leaving his name or contact information, he’s not a keeper.


You Might Like This Movie If: You remember the days when Carrie Fisher was as high as a kite, and you always wondered what her life was like back then.


Really?: So wait...the insurance company won’t let Suzanne work on the movie after she gets out of drug rehab unless she agrees to live with her overbearing mother for the duration of the shoot? Hmm... that smells like a wacky sitcom plot to me!


Rating: Postcards From the Edge is a well-written (kudos to Carrie!) character-driven driven drama with excellent performances from Streep and MacLaine and cameo performances from Gene Hackman, Richard Dreyfus, Annette Bening and Rob Reiner. It’s a good film, but a bit lightweight. Suzanne’s drug problem gets shoved to the back-burner (she says she wants to go back to doing drugs, but we never see much evidence of that) and we’re supposed to believe that her addiction is secondary to establishing a breakthrough with her mom. 8/10 stars.