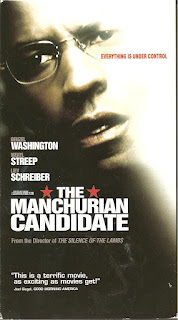 Synopsis: Denzel is nuts, Liev Shreiber is smarmy, and Meryl Streep is Hilary Clinton on crack.


Blurb From the VHS Jacket: “everything is under control.” [Sorry – that’s it. The rest consists of film reviews]


What Did I Learn?: If you want to convince somebody there’s a giant conspiracy involving mind control and computer chips implanted into kidnapped American servicemen, you might want to staple some of those loose-leaf pages, or put them in a three-ring binder, first.


Really?: 1) So wait – Raymond Shaw is a Congressman, and about to become Vice President – and his Mom orders him to act as a hitman, and kill a US Senator in plain view in the middle of a river? I realize the Manchurian Corporation execs give Streep a hard time about this decision in the film, but it still smells like bullshit to me. Wouldn’t she have access to dozens of qualified shooters who could have done the job? 2) Why does Marco act against his programming at the end of the movie? Does Shaw re-program him with different orders? If so, Jonathan Demme should have explained it to the audience. 3) Why would Marco turn away Corporal Melvin when he tells him about the weird dreams he’s having, when Marco has had the same dreams for years? 4) It’s an un-written rule in US politics that a bachelor can’t get elected President, or chosen for the Number Two slot on a Presidential ticket. There’s no way Shaw would get picked. 5) So wait...Marco/Denzel is a US Army Major, and he doesn’t realize that the microchip that falls down the sink is easily retrievable by unscrewing a pipe? Come on...


Rating: The Manchurian Candidate is a pretty good psycho-thriller, but it pales in comparison to the original in a number of respects. While the Frankenheimer version included some very clever political satire about McCarthyism, the remake is practically humourless, and the political scenes (devoid of party identifiers, and chock full of ESPN-style TV graphics) are over-the-top and never sound terribly real. Similarly, when Shaw murders Senator Jordan and Jocelyn in the first film, the realization of what he’s done ruins him – in this version, the act is mostly devoid of meaning because we never see any interaction between Shaw and Jocelyn. While I recommend watching The Manchurian Candidate, I can’t give it a great rating. 6.5/10 stars.