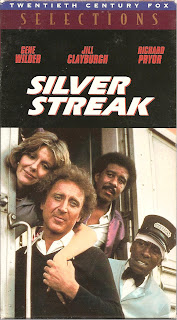 Blurb From the VHS Jacket: “in this wild comedy adventure, rail passenger George Caldwell (GENE WILDER) finds that a romantic escapade with a sultry secretary (JILL CLAYBURGH) puts him in the middle of a Hitchcockian murder plot. Leaping on and off the train, in and out of roomettes, bars and dining cars, George teams up with an amiable, small-time crook (RICHARD PRYOR) to defy the murderer’s henchmen, FBI agents and a host of other outrageous characters.”

What Did I Learn?: If you’re travelling cross-country by rail, don’t try to get laid – it isn’t worth the hassle.

You Might Like This Movie If: You’ve always wanted know how to quickly acquire some soul. (Yes, it's that scene...)

Really?: 1) Why would Devereau kick his own wounded henchman off the train? That makes no sense. 2) I had a bit of trouble believing the cops would give George a revolver and a box of shells, or that he and Grover would be the only ones to board the train during the big shoot-out. 3) I’m not sure I would get into a biplane piloted by a woman who wrongly addresses me as “Steve”. 4) So wait – the bad guy kills people because he sucks at authenticating works of art?

Rating: Silver Streak was one of my Mom’s favourite movies, and I’ve always loved it, too. This stylish homage to Hitchcock has it all: suspense, romance, action, comedy, and some very real buddy chemistry between Gene Wilder and Richard Pryor (I’d say this was the only one of their film pairings that was any good). My only complaint would be the final half-hour or so, when the action gets hot-and-heavy, but the “Really?” moments start to pile up. 9/10 stars.