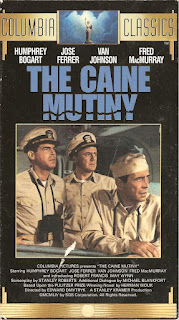 Dang – this would have been perfect for my recent tribute to Humphrey Bogart!


Synopsis: Dad from My Three Sons schemes as Bogie, um...plays with his balls.


Blurb From the VHS Jacket: “This is a classic film of modern-day mutiny aboard a Naval vessel based on the Pulitzer Prize-winning novel by Herman Wouk. The nervous and inept behaviour of Captain Queeg (Humphrey Bogart) during manoeuvres aboard the USS Caine – a destroyer/mine sweeper – attracts the attention of the ship’s crew members and its executive officer, Maryk (Van Johnson). When Queeg’s neurotic behaviour reaches a breaking point during a fierce typhoon, Maryk takes command of the ship. Queeg then retaliates by having Maryk court-martialed.”


What Did I Learn?: According to this movie, there has never been a mutiny in the US Navy.


Really?: Why in the world did Stanley Kramer include a long scene of Robert Francis and his lady riding horses in Yosemite National Park for a movie about naval warfare? At best, it’s pointless; at worst, it lessens the tension we’re all starting to feel.


Rating: The Caine Mutiny is a great story that isn’t told very well in this movie. Bogart is fantastic as the unglued Captain Queeg, and Fred MacMurray provides a masterful performance as the slippery Lt. Keefer. Unfortunately, it takes ages to actually arrive at the court-martial, and the romantic subplot (as well as the Yosemite scene) is a waste of time. For a tighter re-telling of this tale, check out Robert Altman’s The Caine Mutiny Court Martial (1988), featuring Eric Bogosian and Jeff Daniels. 6.5/10 stars.