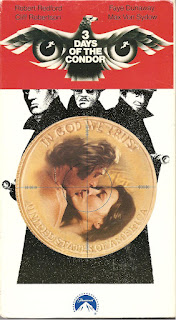 Synopsis: Surprisingly-street smart bookworm outwits CIA assassins by... um... kidnapping a hot chick and holding her at gunpoint in her apartment? Wha...?


Blurb From the VHS Jacket: “Robert Redford stars as a CIA agent (code name Condor) on the run from a mass slaughter in his CIA research office, who uncovers the possibility of another CIA operating within the organization. Reporting the massacre to his superior (Cliff Robertson), Redford suddenly finds himself the target of both his employers and the unknown killers of his associates. Faye Dunnaway portrays a lonely photographer who is abducted by Redford and seduced into helping him.”


What Did I Learn?: If you’re a CIA analyst, and you’re not sure who’s trying to kill you, it might be a good idea to avoid meeting contacts in deserted alleyways. Just sayin’...


Really?: 1) So wait – you arrive back at the office from lunch and find the receptionist and your boss shot dead. Wouldn’t most normal people run like hell? Would you, or anyone else really explore the rest of the building to look for survivors? 2) Max von Sydow’s hitman-for-hire character is indeed pretty cool, but he killed all of Redford’s colleagues. How could he do a last-minute ‘face turn’, and never receive any punishment for his actions?


Rating: Three Days of the Condor isn’t always entirely believable, but it is a well-written and exciting 1970s spy thriller with solid performances from Redford, Dunnaway and Sydow. Interestingly, significant parts of Condor were filmed at the now-destroyed World Trade Centre, and the film offers a glimpse of a long-gone New York City. 7.5/10 stars.