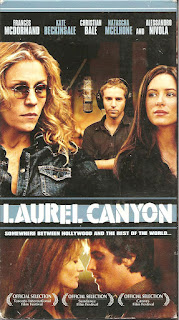 
Blurb From the VHS Jacket: “Academy Award winner Frances McDormand (Almost Famous, Fargo) stars in the sexy and witty story of a hard-living, free-thinking, rock-and-roll record producer who finds herself unexpectedly sharing a house with her straight-laced son and his super-conservative bride-to-be.”


What Did I Learn?: Psychiatrists are either angry and repressed young men or sex-crazed vixens.


You Might Like This Movie If: You were a huge fan of the Steve Canyon TV series, and figure this must involve the further adventures of his sister.


Really?: 1) I kept waiting for Alex (Kate Beckinsale) to tell Sam (Christian Bale) he obviously has a chip on his shoulder towards his mother and her friends, but she never does. 2) It’s amazing how everyone is polite and civil to each other – not to mention still living under the same roof – the morning after their giant blow-up.


Rating: Laurel Canyon is a good, but not great film. Frances McDormand is especially impressive as the sexually-liberated Jane, but the script often doesn’t ring true (it’s also strange that none of the other main performers use their own accents) and I had a bit of trouble believing Alex would seriously consider having sex with her fiance’s mom or her sleazy rocker boyfriend. 7/10 stars.