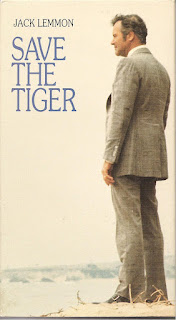 
Blurb From the VHS Jacket:  “Jack Lemmon plays Harry Stoner, a man caught in violent collision with his past and present life. He believes there is nothing significant in his life except survival, and that instinct pushes him beyond moral conduct. He’ll juggle the books, supply women for his clients...and even set fire to his own dress manufacturing factory.”


What Did I Learn?: If you’re thinking of torching an unused factory/warehouse for the insurance money, it’s a really good idea to ensure the building doesn’t already violate every fire code in the book.


You Might Like This Movie If: You’ve always wanted to learn more about the oh-so-glamourous fashion industry.


Really?: I’m not sure how many teenage girls would have asked to “ball” Jack Lemmon in 1974, let alone a character played by Lemmon, but then, what do I know about flower children?


Rating: I don’t have a favourite movie, but Save the Tiger is definitely one of my favourites. Lemmon gives an outstanding performance (maybe the best of his career) as Harry Stoner, a frustrated, financially-troubled, and corrupted clothing manufacturer who is haunted by his memories of WWII, and who only occasionally gets to be himself. Highly recommended – especially the scene of Lemmon and Jack Gilford meeting the arsonist in a sleazy movie theatre. 10/10 stars.