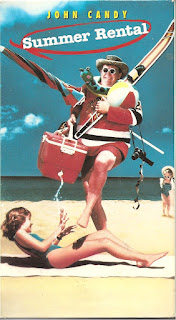 Please click the link to read my review of the somewhat similar film, The Great Outdoors.


Synopsis: It’s basically 86 minutes of John Candy getting smacked in the nuts before he wins the big regatta.


Blurb From the VHS Jacket: “Comedy sensation John Candy plays the stressed-out air traffic controller whose much-needed family holiday yields one hysterical misadventure after another – from settling into his hovel, to settling down on a ‘party’ beach, to settling the score on a nut at sea. The fun’s in the sun, and so’s the moral: taking it easy is tougher than landing a 747.”


What Did I Learn?: If an insecure woman flashes her fake boobs in your face, and her fed-up husband asks you to give them a feel, just smile and tell her they look perfect.


You Might Like This Movie If: You’ve always wanted to hear John Candy and Rip Torn sing this song.


Really?: 1) So, John Candy leaves the door to his run-down summer rental home open for what...20 minutes, and the place is suddenly infested with freeloaders? 2) What the hell is John Laroquette doing in a bit part in this movie? Was he part of some deleted subplot about Candy’s wife cheating on him? 3) Why would Scully (Rip Torn) agree to throw his freezer and all the food overboard when they constitute his livelihood? And if the extra weight was holding them back, why on Earth would Candy agree to bring his wife and kids along for the big race?


Rating: Summer Rental delivers some solid, if-low-brow laughs (the scene of an injured Candy experiencing a meltdown as he kicks the freeloaders out of his beach home – and then describes an episode of “The Smurfs” to a fat slob – is comedic gold!) but it’s not a good movie. The first hour or so consists of Candy injuring himself in a series of unfortunate incidents, followed by a highly-contrived and completely unbelievable boat race. Let’s just say that the late, great John Candy was the best thing in this turkey and leave it at that. 6/10 stars.