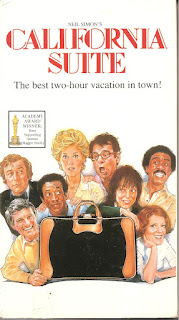 
Blurb From the VHS Jacket: "The name Neil Simon has become synonymous with funny, often touching comedies - and CALIFORNIA SUITE is no exception. Lending their considerable comic talents is an all-star cast."


What Did I Learn?: 1) The best California clothes are found at Bloomingdale’s in New York City. 2) If your wife is set to arrive at your hotel the next morning, don’t let your hooker drink an entire bottle of tequila.


You Might Like This Movie If: You simply love obviously-scripted Beverly Hills drama. (I really wanted to include a clip of Bill Cosby beating the crap out of Richard Pryor in California Suite, but couldn't find one).


Really?: 1) I had a great deal of touble believing Dr. Gump (Pryor) and Dr. Panama (Cosby) and their wives would agree to vacation together when it’s pretty obvious these guys really don’t like each other. 2) People don’t usually speak to each other in sets of strung-together one-liners. Just sayin’, Neil Simon...


Rating: Comedy and drama mix uneasily in California Suite, although it does provide a few mild laughs and poignant moments, and holy crap, what a cast: Cosby, Pryor, Walter Matthau, Michael Caine, Jane Fonda, Alan Alda, Maggie Smith (she won an Oscar for playing an Oscar-loser in this film), Elaine May, and even a cameo from Dana Plato. Still, the film suffers from two significant problems: 1) the too-clever-by-half “witty” dialogue sounds fake, isn’t funny, and wears thin after the first twenty minutes or so, and 2) I expected the four stories to somehow converge, or intertwine, or something, and they never do. Why couldn’t Neil Simon or Director Herbert Ross have found a way for Matthau and Pryor to shoot the shit for a couple of minutes in the bar? California Suite is a lot like its opening credits of lovely flute jazz and watercolour images: pleasant, yet a bit forgettable. 6.5/10 stars.