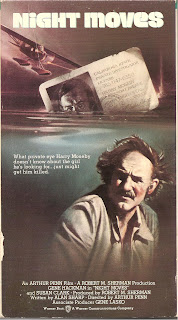 Synopsis: Gene Hackman is a hard-boiled private detective hot on the trail of a missing heiress... but who cares about his casework when we can focus on his personal problems?


Blurb From the VHS Jacket: “Some things come with the territory. Take movie detectives, for example. We expect our world-weary hero to get the girl, solve the mystery, holster his still-warm .38 and, before the smoke clears, tie up all the loose ends and slug down a shot of rye. Private Investigator Harry Moseby wishes life were so simple.”


What Did I Learn?: In 1973 (the year Night Moves was filmed) Melanie Griffith looked amazing topless.


Really?: 1) I love it when movie and TV private eyes continue to investigate their cases long after they have been paid by their clients. Come on – does anyone really do that? 2) Wow...what are the odds of accidentally stumbling upon a dead body that has been buried at sea?


Rating: Night Moves is a cleverly-written, and very well-acted quasi-detective story that puts a lot of emphasis on Hackman’s personal and marital problems (without much resolution, by the way). Hackman is impressive as the self-loathing Moseby, and the movie features early performances from Griffith, and from Schuster at the Movies’ favourite unlikeable guy, James Woods. Unfortunately, Night Moves is marred by a VERY slow pace, and a hit-and-miss movie soundtrack that’s simply awful in places. 8/10 stars.