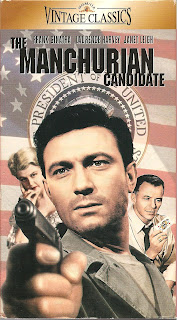 
Blurb From the VHS Jacket: “Ask Major Bennett (Frank Sinatra) and he’ll say that Sergeant Raymond Shaw (Laurence Harvey) is a hero worthy of the Medal of Honor. But despite what he says, Marco suspects otherwise. A bizarre, recurring nightmare gives him the uneasy feeling that Shaw is something less than heroic and far more insidious. Is it possible that Shaw is a traitor? Can Marco convince the Army of his suspicions?”


What Did I Learn?: Hot chicks are easily approachable on long train rides. Oh wait – I learned that from Silver Streak.


You Might Like This Movie If: you know that all of Frank Sinatra’s acting gigs were classy and tasteful.


Really?: 1) Come on...what are the odds that Jocelyn would choose to wear a Queen of Diamonds costume to the party and she’s not in on the conspiracy? 2) I had a great deal of trouble believing a mother – even one who is estranged from her son – would use him as an assassin. And WTF was up with that incestuous kiss?! 2) What was up with that weird conversation between Marco (Sinatra) and Eugenie (Janet Leigh) when they meet on the train – it sounds like she’s throwing codewords at him to reactivate his mental programming? 4) Once Army Intelligence has determined Shaw has been brainwashed, wouldn’t he be under constant surveillance? It’s amazing how Marco essentially leaves him alone for long stretches of time.


Rating: Roger Ebert was right – while The Manchurian Candidate is now 50 years old, it doesn’t feel like a “classic” movie so much as a timeless thriller. The film is well-acted (Sinatra is awesome as Major Marco, but I’ll never watch Murder She Wrote the same way again after Angela Lansbury’s magnificent performance as one evil bitch), well-directed by John Frankenheimer, and suspenseful. Unfortunately, the film drags a little in the middle, the pre-war flashbacks were excessive (and I was about ready to throw something at the TV screen if Harvey/Shaw said “loveable” one more time) and there was a bit too much “my dear Sergei” interaction among the communists. Highly recommended. 9/10 stars.