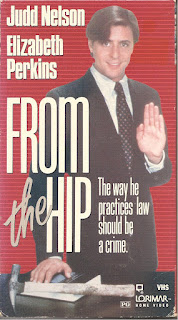 Synopsis: Judd Nelson inserts another nail into the coffin containing his post-Breakfast Club career. (By the way: for another take on The Breakfast Club, click this link).


Blurb From the VHS Jacket: “Criminal justice is about to be hit with a revolution. The perpetrator is a recent law school graduate Robin ‘Stormy’ Weathers (Judd Nelson) who jumps in and shoots ‘FROM THE HIP.’


What Did I Learn?: Apparently, judges secretly love it when lawyers grandstand, plant sex toys into the prosecutor’s briefcase, and throw courtroom etiquette and practices out the window.


Really?: 1) Um...nearly every scene in this movie qualifies as a “Really?” moment, from Judd Nelson’s incredibly lavish high-rise apartment, complete with a glassed-off patio for his collection of doves (he’s fresh out of law school at this point!) to getting John Hurt to confess his guilt on the witness stand. 2) See “What Did I Learn?,” 3) What was the point of placing Judd’s adversary from his first trial on the prosecutor’s team when the guy never says anything? 4) OMG – they ripped off a scene from Matlock!! (Or maybe Matlock ripped off a scene from this movie – one or the other).


Rating: From the Hip is not a terribly good courtroom comedy. Judd Nelson is far too obnoxious to be likeable, the courtroom theatrics are completely unbelievable, and while I liked both Ray Walston as the first judge, and John Hurt’s creepy performance as a Claus von Bulow-type murderer, the latter is totally out of place in From the Hip. I cannot recommend this movie. 5/10 stars.


Does it Work For a BAD MOVIE NIGHT: I think so.