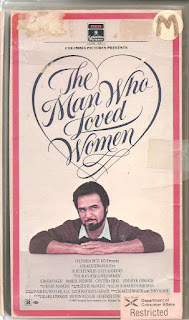 
Blurb From the VHS Jacket: “A Los Angeles playboy, renowned for his fast and loose lovelife, runs head-on into a mid-life crisis in this uproarious Blake Edwards comedy starring Burt Reynolds and Julie Andrews. David Fowler (Reynolds) has two passions, sculpting and women, and he’s been quite successful in both departments until now. David finds that his insatiable hunger for women begins to render him socially, artistically and finally, sexually impotent.”


What Did I Learn?: If you want a strange woman to call you, smash her tail-light and leave a note with your phone number.


You Might Like This Movie If: You think Burt Reynolds is the coolest guy on the planet.


Really?: So wait...Marilu Henner agrees to sleep with Burt even after it’s obvious he’s been stalking her, and he damaged her car? WTF?


Rating: Ugh. Following his success with the Pink Panther flicks, Blake Edwards made a string of unfunny, and self-indulgent semi-autobiographical movies about rich, middle-aged men who want to bang an endless series of hot chicks, and The Man Who Loved Women is one of those films. Reynolds does his best with the script (there is one sort-of-amusing scene of him crazy-glued to a yappy dog and several carpet patches), but there’s no chemistry between him and Julie Andrews, and the musical score is just dreadful. I cannot recommend this movie. 5/10 stars.