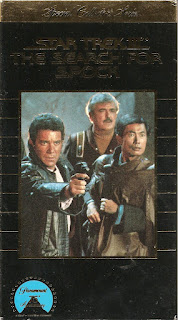 
Synopsis: It’s Star Trek! Except...there’s no Spock, the Enterprise blows up, and everyone is old and fat.


Blurb From the VHS Jacket: “Admiral Kirk’s defeat of Khan and the creation of the Genesis planet are empty victories. Spock is dead and McCoy is being driven insane. Then an unexpected visit from Sarek, Spock’s father, provides a startling revelation: McCoy is harboring Spock’s living essence.”


What Did I Learn?: Short people do not appreciate being addressed as “Tiny”.


You Might Like This Movie If: You’ve always wondered if Leonard Nimoy ever went out In Search Of...Himself.


Really?: 1) Is it possible to operate a Federation starship with a Captain and crew of four? 2) It’s funny how Spock’s rapid aging stops right around the point at which he looks like Leonard Nimoy, circa 1984. 3) I have to wonder if Kruge has morale problems on his ship; I mean he kills one of his officers after dude makes an honest mistake. 4) Does the last remaining Klingon beam up Kirk thinking he’s Kruge, or has Saavik taken control of the Bird of Prey? This is a bit unclear...


Rating: The Search for Spock isn’t a terrible film, but it is something of a letdown after The Wrath of Khan. The vital chemistry between Kirk, Spock and McCoy is missing (for an obvious reason), so the story depends more upon Sulu, Chekhov and Uhuru, who aren’t that interesting. Moreover, it’s obvious that Roddenberry and company had no idea how to end this movie, so...the planet explodes! Kirk and Kruge have a fist-fight! And then the last ten minutes are just hokey, anti-climactic and dull. 6.5/10 stars.