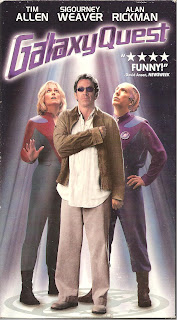 
Blurb From the VHS Jacket: “For four years, the courageous crew of the NSEA Protector - ‘Commander Peter Quincy Taggert’ (TIM ALLEN), ‘Lt. Tawny Madison’ (SIGOURNEY WEAVER) and ‘Dr. Lazarus’ (ALAN RICKMAN) – set off on thrilling and often dangerous missions in space...and then their series was cancelled! Now twenty years later, aliens under attack have mistaken the Galaxy Quest television transmissions for ‘historical documents’ and beamed up the crew of has-been actors to save the universe.”


What Did I Learn?: Nerds are extremely useful - be nice to them.


Really?: 1) Gee...it’s a good thing nobody is hurt during that rather violent crash-landing near the end of the movie. Considering the spaceship destroys a number of parked cars and smashes a huge hole in the convention centre, and everyone thinks it’s a big publicity stunt, I’m surprised nobody goes to jail for reckless endangerment, or gets sued. 2) Why doesn’t Rickman remove his prosthetic headpiece when he’s at home?


Rating: Galaxy Quest is a funny and thoroughly entertaining send-up of Star Trek. Allen and Weaver are great, although Rickman nearly steals the show as a frustrated and typecast actor stuck playing a variation of Mr. Spock. My only complaint would be that the film focuses a bit too much time on the action and special effects, and not enough on character development; the fictional cast obviously have many problems with Allen’s character at the beginning of the film, and yet they’re all magically resolved by the end after their adventure. Galaxy Quest is a good film that could have been even better. 8/10 stars.