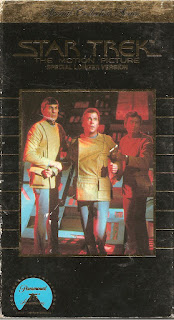 
What Did I Learn?: 1) Guys in the 23rd century apparently really, really dig bald chicks. 2) Mankind must never, ever send any more unmanned probes into deep space.


You Might Like This Movie If: You believe William Shatner and Leonard Nimoy did their finest work in the 1970s.


Really?: 1) How many different uniforms does Kirk own? And why does he, Spock, Bones and Decker take the time to change outfits before they exit the ship to meet V’Ger? 2) It’s rather convenient that Spock is in telepathic contact with V’Ger even before the Enterprise is assigned to investigate, and that he’s available to serve as Science Officer after an unfortunate teleporter accident. 3) For an experienced Starfleet officer, Kirk provides the absolute worst pep talk to his crew that I’ve ever seen on screen. 4) I have a hard time believing Dr. McCoy is the kind of guy who would wear a big, gold medallion with an unbuttoned shirt.


Rating: I hate to diss Star Trek the Motion Picture, as it’s the most intellectual and ideas-based of the Star Trek films, but it’s not a great film. Far too much time is wasted on long and pointless aerial shots of the Enterprise flying in space or in spacedock (I have a funny feeling Gene Roddenberry finally had a decent special effects budget, and decided to go nuts with it). And while the later Trek movies became dumbed-down action flicks, very little actually occurs in STTMP – certain scenes such as the Enterprise flying into a wormhole seem contrived and unconvincing. Overall, meh. 6.5/10 stars.