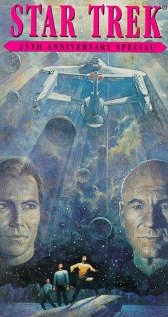 Star Trek Film Fest Movie #8 (Ha – I guess you were expecting Star Trek First Contact? Well, I don’t own any Next Generation films, I don’t particularly like any of them, and I have no plans to actually write reviews for them). This TV special was recorded by an old buddy of mine in 1991, and the videotape even includes vintage commercials – especially car company ads.


Blurb From the VHS Jacket: N/A “Voyage through a celebrated past and into an exciting future!” [Taken from imdb.com]


You Might Like This Movie If: You think Shatner and Nimoy are at their very best when they act as corporate whores.


Really?: LeVar Burton seems like a nice guy, but why did somebody tack one of his Reading Rainbow segments of Burton receiving NASA training onto this turkey? And an interview with then-Vice President (and NASA Chairman) Dan Quayle? What was Producer Donald R. Beck thinking?


Rating: The Star Trek 25th Anniversary Special is atrocious. It’s an hour and a half of Shatner and Nimoy introducing clips from the movies and TV shows (usually with an awful joke or two), and then cutting to interviews with Trek-savvy celebrities. You won’t learn a thing about Star Trek except that it had a really, really, really, really profound impact on American culture, because... that’s what all of them tell us. The special is designed to “sell” Star Trek the Undiscovered County (and maybe encourage dumb Americans to rent Shatner’s Final Frontier turkey), and it gets old, fast. 2/10 stars.