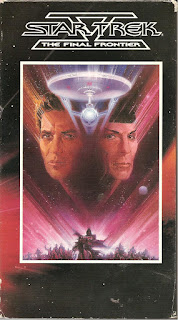 
You Might Like This Movie If: 1) You’ve always wanted to see this guy in a Star Trek movie. 2) You believe this song could be part of a kickass soundtrack.


Really?: 1) Gee...that “Great Barrier” at the Centre of the Universe was a bit of a dud. I wonder how they made it through. 2) I realize the Enterprise is manned by a skeleton crew, but how does Sybok gain control of the ship so easily? Is everyone standing around, passively? 3) Fart jokes? A Star Trek movie is resorting to fart jokes?  4) Even if that alien dude at the end isn’t really God, it’s a bit of a letdown to see him bite the dust after taking a couple of proton torpedos to the head.


Rating: Star Trek V: The Final Frontier is one, long William Shatner ego trip; not only does he direct, but he gives himself the best lines, and most of the heroics. Nearly everything about this movie is wrong: the special effects are sub-par, the pacing is inconsistent, the storyline meshes poorly with Voyage Home-style comedy, and the characters become caricatures...Sulu gets lost in the woods? Scotty bonks his head on a metal beam? Uhura...well, let’s not bring up that fan dance, again. I’m barely recommending this movie only because Laurence Luckinbill provides a wonderful performance as Sybok, and I liked the interplay between Kirk, Spock and Bones. 5.5/10 stars.