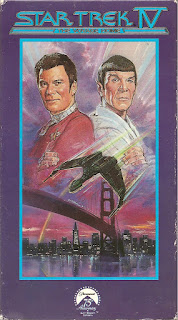 Synopsis: It’s a bit like Ferris Bueller’s Day Off with whales and a spaceship.

Blurb From the VHS Jacket: “The most acclaimed and, without a doubt, the most intriguing Star Trek adventure of all time. It’s the 23rd Century, and a mysterious alien power is threatening Earth by evaporating the oceans and destroying the atmosphere. In their frantic attempt to save mankind, Kirk and his crew must time travel back to 1986 San Francisco where they find a world of punk, pizza and exact-change busses that are as alien as anything they’ve ever encountered in the far reaches of the galaxy.”

What Did I Learn?: The words “double dumbass on you” wouldn’t offend anyone.

You Might Like This Movie If: You know that Admiral Kirk is right – you need to use a dumptruck of “colourful metaphors” if you wish to be taken seriously.

Really?: 1) Hmmm...a strange probe comes to Earth and blasts a message that cannot be answered – that’s a plot from Star Trek the Motion Picture!! 2) Everyone seems rather blasé about leaving behind Chekhov’s phaser and communicator, taking Jillian back the 23rd Century, and providing the formula for an advanced chemical compound. 3) So wait...Scotty and Bones place an order for sheets of synthetic aluminum – a material completely new to 1986 – and that order can be completed and delivered the very next morning??! 4) I don’t suppose anyone would notice a cloaked Klingon Bird of Prey in the middle of a city park.

Rating: The Voyage Home is the most atypical of the Star Trek films: there’s no villain, no real fight/action scenes, and it’s basically a science fiction comedy. The movie has many wonderful moments (Kirk and Spock dealing with an obnoxious young punk on the bus, is a perfect example), but the fun is partially offset by one of Star Trek’s less endearing traits (to me, anyway): its smug, trendy urban snobbishness. The Voyage Home has a few too many “I can’t believe they’re still using [fossil fuels, kidney dialysis, nuclear fission, money, brain surgery, etc....]!” scenes, and while I sympathize with its save-the-whales message, I’ve always found something a bit distasteful about Hollywood big-shots looking down upon working-class whalers trying to make a living. 8/10 stars.