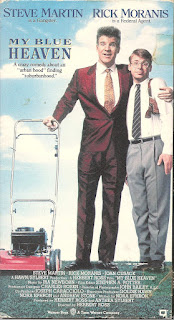 (This would have been an interesting choice for my blog’s tribute to gangster films a few months ago. My Blue Heaven is loosely based upon the memoirs of Henry Hill, whose mafia exploits were made into a very different movie).


Blurb From the VHS Jacket: “Can an urban hood adjust to suburbanhood? The FBI’s Witness Protection Program is turned funnyside up when Parenthood stars Steve Martin and Rick Moranis play mob informant Vinnie Antonelli and FBI agent Barney Coopersmith in the criminally comic My Blue Heaven.”


What Did I Learn?: Mobsters are warm, generous people with hearts of gold and a zest for life, while law enforcement officials are cold, humourless and uptight.


Really?: I realize this movie is a comedy, but: 1) Do American DA’s interrogate felony suspects, and are FBI agents able to act as counsel in criminal cases? 2) Not many men would mow their lawn while wearing a sharkskin suit. 3) Couldn’t Hannah’s ex-husband have Barney charged for assault and battery? (and is Hannah the type to approve of strongarm tactics?) 4) So wait... Vinnie decides to live openly under his real name even though every wiseguy in the country wants to take a shot at him?


Rating: While I’m a fan of Steve Martin’s straight-man roles (think Planes, Trains, and Automobiles), I find him unbearable when he shifts into wild-and-crazy-guy mode and tries to play a “character”. Martin grossly overacts and presents a whitewashed, musical-comedy version of the Mafia. That’s just the beginning of problems with My Blue Heaven: the script is lame, the jokes aren’t funny (Rick Moranis forgets to unhook his seatbelt before exiting the car – ha ha), and the ending is atrocious. I might have given this movie a slightly higher rating, but my ears are still smarting from the horrible merengue music that gets repeated too many times. I hate this movie and I cannot recommend it. 4/10 stars.