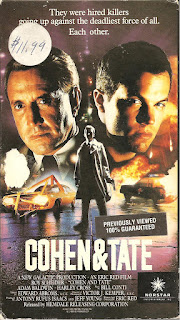 
Synopsis: The shittiest road trip since somebody crash-tested the Ford Pinto.


Blurb From the VHS Jacket: “Meet Cohen and Tate. Two Mafia hit men who don’t exactly hit it off. Cohen (Roy Scheider) is an old pro, a cold-blooded killer who’s all business. Tate (Adam Baldwin) is a young hothead who kills for fun. Together, they kidnap 9-year old Travis Knight, an eyewitness to a recent mob rub out. Now, they’ve got 24 hours to deliver him to Houston for interrogation. And elimination.”


What Did I Learn?: A really awful joke: what’s the last thing that goes through a bug’s mind when he smacks into a windshield? Its ass.


You Might Like This Movie If: You know that a fun, friendly drive through the American countryside brings out the best in people.


Really?: Let’s say you’re a professional hitman, you’ve kidnapped a 9-year old witness to a mob murder and you have a long drive to Houston ahead of you. If the kid asks if he’s being transported to face torture and certain death, why the fuck would you even think about telling him the truth if you want him to behave?


Rating: Roy Scheider gives an impressive performance in a thoroughly unimpressive film. Cohen and Tate is a character-driven drama that’s populated with characters who are either completely unlikeable (the two hitmen) or completely unbelievable (a 9-year old Iago who knows how to play one off against the other? Sorry - I ain't buying that one). I was expecting a bit more development, or for one of the hitmen to have a “what am I doing?” moment, but that never happens. I cannot recommend this movie. 4/10 stars.