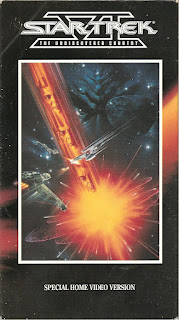 
Blurb From the VHS Jacket: “After years at war, the Federation and the Klingon empire prepare for a peace summit. But the prospect of intergalactic glasnost with sworn enemies is an alarming one to Captain Kirk (William Shatner). ‘They’re animals!’ he warns.”


What Did I Learn?: Same thing I learned from Star Wars: Revenge of the Sith – a bit of prosthetic makeup is all that’s needed to turn talented thespians like Christopher Plumber or Ian McDairmid into hammy, over-acting buffoons.


Really?: 1) The crew uses printed Klingon-English dictionaries to transmit a response to a lazy Klingon outpost? I thought printed books were a rarity in the 23rd Century, and why doesn’t the Communications Officer know how to speak such an important language? 2) Why is the Romulan Ambassador standing in the Federation President’s office as Starfleet pitches a daring rescue mission? 3) I had no idea the Enterprise bridge crew were such a band of bigots until I watched this movie. 4) So wait...Spock goes behind Kirk’s back to sign him up for this mission, knowing full well Kirk still blames them for the death of his son? What a pal. 5) Why does Christopher Plumber randomly quote Shakespeare ("in the original Klingon") throughout the film? Does he suffer from Stratford Festival flashbacks?


Rating: Star Trek VI: The Undiscovered Country is a better film than the Final Frontier, but that ain’t sayin’ much. I’ve never particularly liked this movie...The Undiscovered Country is joyless, the cast is way too old to be Star Trekking, it lacks the familiar Kirk-Spock-Bones banter, and it’s a very thinly disguised “let’s all get along” parable about the end of the Cold War (Gorkon = Gorbachev...gee, that’s clever). I should have left this movie undiscovered. 6/10 stars.