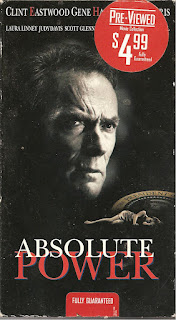 (Yup, that’s a Blockbuster Video sticker in the upper-right corner...you won’t see too many of those, anymore)

Synopsis: Squinty-eyed jewel thief with a heart of gold finds out Gene Hackman puts the POS in POTUS.


Blurb From the VHS Jacket: “He was where he shouldn’t have been and saw what he shouldn’t have seen. Now, who will believe the word of a career thief and ex-con? Who will trust  Luther Whitney when he says he saw a woman killed – and that the man responsible for her death is the President of the United States?”


What Did I Learn?: Apparently, if you’re rich and powerful enough, you can barge into the White House without an appointment, stab the President(!) with a letter opener, and the Secret Service will believe you when you claim the Commander-in-Chief decided to kill himself right in front of his oldest mentor.


You Might Like This Movie If: You’re glad this is all a work of fiction; a POTUS would never engage in rough sex, let alone brag about killing someone.


Really?: 1) Why would the President’s Chief of Staff accompany him on one of his romantic trysts if she isn’t involved? Doesn’t she have more important things to do, like...running the White House? 2) What are the odds of two independent assassins – both using high-powered rifles – attempting to kill the same guy at the exact same time, and causing each other to fail? 3) The burglar alarm rings for a good two minutes before Luther (Clint Eastwood) disables it; wouldn’t it still alert the cops or a security company, and wouldn’t a good thief have bypassed it, entirely?


Rating: Absolute Power is an enjoyable, if highly contrived film with a bunch of “Really?” moments. It’s saved from mediocrity (and a lower score) by strong performances by Eastwood, Hackman (who’s wonderful as the uber-slimy Leader of the Free World) and Ed Harris. 6.5/10 stars.