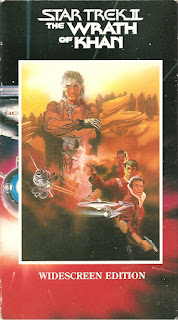 
Blurb From the VHS Jacket: “The Federation Starship USS Enterprise is on routine training manoeuvres, and Admiral James T. Kirk (William Shatner) seems resigned to the fact that this inspection may well be the last space mission of his career. But Khan is back.”


What Did I Learn?: If I ever somehow seize control of a Federation starship, my very first act will be to change its Prefix Code.


Really?: 1) So wait...that worm/eel creature (which presumably needs a warm source of food and shelter) crawls out of Chekhov’s ear simply because he doesn’t want to kill Kirk? And then Kirk fries the little sucker with his phaser even though nobody knows what it might be, or what sort of damage it might have done to Chekhov’s brain? 2) Kirk cheated on a test and Starfleet gave him a commendation for original thinking? If the Kobayashi Maru is in fact a test of “character”, what does re-programming it say about Kirk’s?


Rating: Star Trek II: The Wrath of Khan is a huge improvement over Star Trek the Motion Picture, and you can call it adventure with a capital A. The film works on many levels (Ricardo Montalban is fantastic as the scenery-chewing Khan), although it sorely lacks a real face-to-face interaction between Kirk and Khan. 8.5/10 stars.
http://www.imdb.com/title/tt0084726/