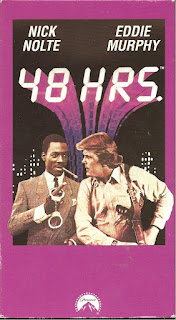 
Blurb From the VHS Jacket: “Nick Nolte and Eddie Murphy make one of the most unusual and entertaining teams ever in Walter Hill’s roller-coaster thriller, 48 Hours. Nolte is a rough-edged cop after two vicious cop-killers. He can’t do it without the help of smooth and dapper Murphy, who is serving time for a half-million dollar robbery.”


What Did I Learn?: Apparently, flashing a police badge entitles the owner to break into people’s homes without a warrant, seize hotel registry information, smash up a redneck bar and harass the patrons, shrug off parking tickets, drive recklessly (and drunk) and get into fistfights on the street.


You Might Like This Movie If: You loved Eddie Murphy’s subsequent singing career and you just have to hear him belt out “Roxanne”.


Really?: 1) So wait...Cates (Nolte) hands his gun over to a hardened killer even though it’s the only thing  preventing said killer and his buddy from wasting everyone in the hotel lobby? Couldn’t Cates have defused the situation by saying: “get out of here”? 2) Is there some reason why Ganz and Billy Bear steal an empty bus, aside from setting up a cool car-bus chase? 3) Doesn’t Cates ever need a good night’s sleep or a clean shirt? 4) I had a hard time believing Cates would still be on the job after his boss discovers he forged documents to get a convict out of jail on a 48 hour pass.


Rating: 48 HRS is still a fun action-comedy (although it’s far more bang-bang than ha-ha), even after thirty years; Nolte and a very young Eddie Murphy share some undeniable chemistry, as well as a lot of foul-mouthed dialogue. The movie is much rougher around the edges than Beverly Hills Cop or Murphy’s other later films, there’s a lot of racism and gratuitous violence, and neither he nor Nolte are all that likeable, so it’s not for everyone. 8/10 stars.