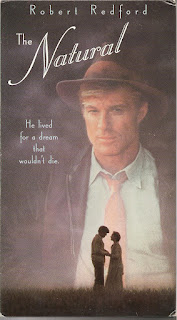 Synopsis: It’s like a baseball version of Excalibur, except that Redford and “Wonderboy” chop up scoreboards, giant clocks and klieg lamps instead of bloodthirsty Saxons.


Blurb From the VHS Jacket: “Nothing was going to stop Roy Hobbs from fulfilling his boyhood dream of baseball superstardom. Robert Redford stars in this inspiring fable that begins when 14-year old Hobbs (Redford) fashions a powerful bat from a fallen oak tree. He soon impresses major league scouts with his ability, fixing his extraordinary talent in the mind of sportswriter Max Mercy (Robert Duvall) who eventually becomes instrumental in his career. But a meeting with a mysterious woman shatters his dreams.”


What Did I Learn?: If your doctor informs you that playing another baseball game could rupture the lining of your stomach and kill you, and the evil owner of your team wants to pay you 20 grand to sit it out anyway, take the money!!


Really?: 1) So wait...Hobbs’ career was sidetracked for 16 years because some crazy lady shoots him with a silver bullet and then kills herself? Weird stuff happens, but wouldn’t a farming accident or something like that be a little more plausible? 2) I realize the latter part of the film takes place in the late 1930s, but I had no idea you could use your very own home-made sporting goods equipment in a Major League game. Maybe this was before the branding age, but wouldn’t manufacturers have enjoyed exclusive contracts to supply this stuff?


Rating: Seeing The Natural again after a number of years, I must say that it left me with mixed emotions. On the one hand, it’s a beautifully-crafted movie with a number of great scenes and an inspiring message about second chances (Redford is powerful when he gets angry with Wilford Brimley for not using him on the team, and demands an opportunity to show his talent); on the other hand, the villains are cartoonishly evil, Glen Close’s role as Hobbs’ one true love is one-dimensional, and Hobbs is so virtuous and perfect that you know he’ll never take a bribe or sell out. Good film, lots of promise, could have been much better. 7.5/10 stars.