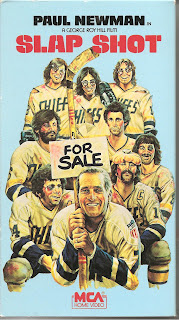 
Blurb From the VHS Jacket: “This irreverent and outrageously funny look into the world of professional hockey has Paul Newman as the coach of the Chiefs, a third-rate, minor league hockey team. To build up attendance at their games, management signs up three odd-looking players whose job it is to literally attack and demolish the opposition, to the delight and cheers of the steadily increasing throng of fans.”


What Did I Learn?: Openly questioning the sexual orientation of the opposing goalie's wife is an effective means of scoring a goal or two.


You Might Like This Movie If: based on the title, you figure it must be a two-hour-long infomercial.


Really?: Slap Shot is an often-silly film, and it might not be entirely fair to judge it on this basis. That said, I had a hard time believing the Chiefs could get away with even a fraction of their violent shenanigans without winding up in prison, or at least getting suspended from the "Federal League".


Rating: Oh dear... I have a feeling the reaction to this review is going to be a replay of those occasions when I reviewed Raiders of the Lost Ark and Gosford Park. I realize there are hockey fans out there who consider Slap Shot to be a cinematic masterpiece. Unfortunately, I've never been into the sport, so I'll be truthful and admit this isn't one of my favourites.

Slap Shot isn't a bad movie, but it often doesn't seem to know if it's supposed to be clever satire or a dopey comedy for sugared-up rugrats. Newman is great as a world-weary player/coach who does his best to play a losing hand, and the film takes an unsentimental, cynical look at minor league hockey. That said, Slap Shot is marred by some very juvenile and low-brow humour, and there are more than a few occasions when it becomes difficult to like Newman's character. 6.5/10 stars.