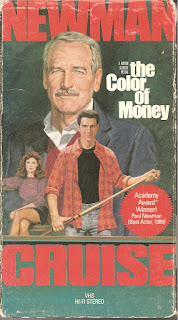 
Blurb From the VHS Jacket: “Paul Newman, one of Hollywood's greatest stars, and Tom Cruise, one of its hottest new talents, ignite the screen in this powerful drama."


What Did I Learn?: “Pool excellence is *not* about excellent pool.”  2) “The balls roll funny for everybody.” 3) “Money won is twice as sweet as money earned.” 4) “You gotta have two things to win. You gotta have brains and you gotta have balls.”
You Might Like This Movie If: You know that cocky and obnoxious come naturally to Newman's co-star.


Really?: 1) Gee...Eddie sure enjoys wearing those tinted sunglasses, even in darkened rooms. 2) I had a hard time believing Eddie - who has been away from billiards for 25 years, and has finally made it back to a big tournament - would forfeit his place in order to play his former protégé. 3) So wait... we wait and wait to see Eddie take on Vince (Cruise) in a game of billiards, and then... [No Spoilers].  4) So, does Vince ever take Eddie's advice, even once?


Rating: The Color of Money is an entertaining, although somewhat formulaic, predictable, and probably unnecessary sequel to The Hustler. Newman won an Oscar for his portrayal of Fast Eddie Felson (whether he deserved it for this movie, or whether he was due for one is open for debate) Mary Elizabeth Mastrantonio is good in a surprisingly well-developed role as Vince's older, tougher and much smarter girlfriend, and even Cruise isn't all that bad. Look for appearances by Forrest Whittaker and John Turturro in small, before-they-were-famous roles. 7/10 stars.