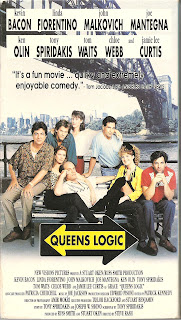 
Blurb From the VHS Jacket: “This wonderful, romantic comedy, reminiscent of The Big Chill, takes a warm and hilarious look at friendship, loyalty and love.” [Really - The Big Chill? Interestingly, that's also how the studios marketed Smoke.]


What Did I Learn?: Guys, if you're extremely late for your wedding anniversary dinner, you can't walk through the door, all smiles and chuckles, and pretend that everything's ok.


Really?: 1) It's heartwarming and lovely that this collection of macho, blue-collar Italian-American New York guys would enjoy a friendship with a salt-of-the-earth gay man (John Malkovich). Heartwarming and lovely, but somewhat unlikely. 2) Is it just me, or are Dennis (Kevin Bacon) and Vinny (Tony Spiridakis) pretty much the same character? It seems to me that one of them could have been written out of the script.


Rating: Queens Logic is a quirky, yet sadly-forgotten little film from the early 1990s. Joe Montegna provides a fine performance as the larger-than-life Al, while Jamie Lee Curtis makes a memorable cameo appearance as a chick who isn't entirely right in the head, and Malkovich nearly steals the movie with a scene near the end when he tells off his snobby boyfriend. The film has its problems - it takes awhile to get started, Dennis and Vinny are basically the same character, and the swimming pool scene doesn't exactly work, but Queens Logic is worth a viewing. 7.5/10 stars.