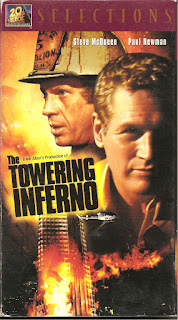 
Blurb From the VHS Jacket: “A dedication ceremony at the world’s tallest skyscraper turns into a high-rise catastrophe when a defective wire in its systems-control panel causes an electrical flare-up. Within minutes, the gala event turns into a hellish inferno, as a raging fire traps society’s most prominent citizens on the top floor.”


What Did I Learn?: Anyone who enjoys illicit sex in a disaster movie can expect to be among the first to be burnt to a crisp.


Really?: 1) Hmmm... for a hot-shot architect with detailed knowledge of electrical wiring, Roberts (Newman) doesn't seem to know very much about gas. 2) It sure is fortunate they decided to build that monstrosity with a zillion gallons of water on the 135th floor... and that the H2O flows vertically downward when the tanks are blown, rather than directly out the first available glass windows.

Rating: Produced by Irwin Allen, The Towering Inferno is very much a rip-off of The Poseidon Adventure, right down to similar characters (precocious young brother and sister, a kindly old man with money troubles, a greedy cost-cutter who gets everyone into trouble, etc...) and even a few instrumental bars of "The Morning After". Newman once referred to this film as a "turkey," because working with Steve McQueen wasn't easy (the latter insisted upon a contract clause which ensured the two of them had exactly the same number of dialogue lines), and the script is hackneyed and clichéd... the term "high-rise roulette" is a prime example, but check out this exchange:

Doug Roberts: I'm not a cheeseburger.

Susan: No, you're way better, all protein, no bread, now all I need to take with you is eight glasses of water.

In spite of the awful writing, however, The Towering Inferno isn't really a bad movie - it's mindless fun for a rainy Sunday afternoon. 6/10 stars.