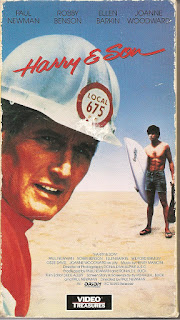 
Blurb From the VHS Jacket: “Only a hard-nose writes off his kid. Only a hero has the courage to change.”


What Did I Learn?: A sure-fire way to piss off Dear Old Dad is to open his last beer, drink a bit from the can, and leave it half-finished in the fridge.


Really?: 1) Um, I get that Harry really needs to get laid, two years after the death of his wife, but come on - how many sons would introduce their dad to a nymphomaniac, take off, and allow her to have her way with the old fart? 2) If Howard doesn't want to work as a "feeder" in the box-making plant, why doesn't he simply quit? Why in the world would he overload the machine, cause chaos, and leave under a cloud? It makes for a nifty scene, but it doesn't ring true. 3) If Harry wants to get back to work so badly, why doesn't he visit a doctor's office and get himself checked out? 4) Hold on - Howard was valedictorian in high school, and yet he has no plans for post-secondary education or a career besides writing stories and detailing cars? Come to think of it, if Howard was so fucking smart, wouldn't he possess some basic knowledge about the science of carbonation? (See: "What Did I Learn?")


Rating: I wanted to like Harry and Son a lot more than I did. It's a small, character-driven drama featuring a solid performance from Newman, as well as cameo appearances from a young Ellen Barkin, Morgan Freeman, Ossie Davis, and Wilford Brimley. Unfortunately, this movie suffers from a number of major problems.

The film might have worked a lot better had it focused like a laser beam on the tensions between Harry and his son, Howie (Robbie Benson) along the lines of I Ought to Be in Pictures. Instead, Newman is off-screen for long stretches, and when he does appear, it becomes increasingly difficult to like the old bastard - especially after he plays an incredibly nasty "joke" on his daughter. It's up to Benson to carry the movie, yet he isn't a terribly good actor, and he plays Howie with such a ridiculous manic energy that you have to wonder what Newman - the Director - was thinking. Another problem is the dizzying array of ideas, characters and sub-plots that are introduced and then discarded (or at least never really developed); that's bad writing, and Newman - the writer - deserves criticism. 5.5/10 stars.