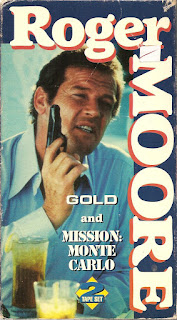 Not Quite a James Bond Movie


Synopsis: It's just like a James Bond movie, except that 007 has a shitty middle-management gig in the natural resources sector, and he never shoots anyone.


Blurb From the VHS Jacket: "A tough mining foreman, Roger Moore, is manipulated by a group of unscrupulous financiers who want to flood the mine to raise the price of gold on the world market."


What Did I Learn?: If you think there's a chance you can sweet-talk your boss' wife into bed, you might want to first clean up the empty champagne bottle and other detritus from your casual encounter with another chick the previous night.


Really?: 1) It takes a very cosmopolitan villain to use his own wife as a means of distracting the hero. 2) Gee...Steyner and his accomplice meet a rather convenient end, don't they? 3) Hmm...so, Steyner promotes Slater to General Manager, and Slater then proceeds to hit on Mrs. Steyner? Great idea, 007.


Rating: Gold is a dated, and somewhat forgettable thriller from the mid-1970s. While it's fun to watch Roger Moore play Bond without actually playing Bond, the script meanders when it focuses on Slater's relationship with Steyner's wife, and most disappointingly,  Slater never uncovers the secret plot, and never realizes until the end that he's being used. The script should have included a lot more detective work, and a lot less romance in the bush. 5.5/10 stars.
http://www.imdb.com/title/tt0071566/?ref_=fn_al_tt_2
Posted by Eli Schuster at 9:40 AM