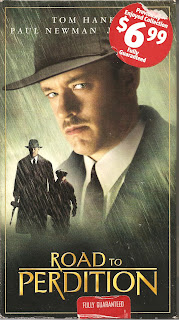 Paul Newman Film Fest Movie #2 (Ok, this is really a Tom Hanks film, but Newman has an important role)


Blurb From the VHS Jacket: "Two-time Academy Award winner Tom Hanks in 'one of his best performances' (Kenneth Turan, Los Angeles Times) stars as Michael Sullivan, a father fighting to keep his only son from travelling the Road to Perdition". [WTF? This is the dumbest write-up I've ever seen... Sullivan's family has been murdered, and he and the kid are actually on their way to Perdition. Sullivan's driving, as a matter of fact!]


What Did I Learn?: If you've just stolen thousands (possibly hundreds of thousand) of dollars from the Chicago mob, and they promise to let you live if you stop annoying them - you might want to fuck off to California, or Hawaii, or Canada, or some other faraway place, just to be on the safe side. Just saying... [Ok, this is more of a "Really?"]


Really?: 1) Come on...does Sullivan seriously think Rooney (Newman) is going to give up his son for execution? 2) Hmm... funny how a trained assassin fires his Tommy Gun at a mob boss and his 5-6 stooges, and not one of them thinks of dropping to the ground or running for cover.


Rating: Road to Perdition is grim with a capital G. It's an impressive film, with excellent performances from Hanks, Newman and Jude Law as creepy hitman Harlan Maguire, but it's also bleak and humourless, and the Connor Rooney character (Daniel Craig) is introduced, yet never fully developed; perhaps he could have accompanied Maguire on the hunt? Just a suggestion... 7/10 stars.