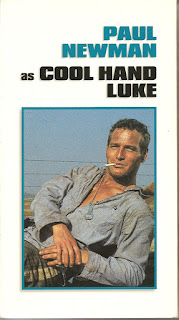 
Blurb From the VHS Jacket: “His crime: nonconformity. His sentence: the chain gang. Paul Newman plays one of this best-loved roles as Cool Hand Luke, the loner who won’t – or can’t – conform to the arbitrary rules of captivity. It recalls other hallmark Newman performances: Luke is The Hustler without a dream of victory, Harper without a moral mission, Hud without a father to defy.”


What Did I Learn?: After you've busted out of jail, it probably isn't a good idea to mail postcards and magazines back to your buddies in the slammer.


You Might Like This Movie If: You admire a hard-working hero who gobbles down eggs, uses pepper as a weapon, and often finds himself in a pickle.


Really?: 1) Prison rape is mentioned early on when the new convicts are warned against playing "grab-ass", but it never becomes an issue. I realize Luke can defend himself against attacks, but I had a hard time believing the obnoxious bad cheque guy wouldn't become somebody's squeeze toy. 2) So, Luke had what...a two-year sentence? There's never any mention of extra time being tacked on after any of his escapes, so I really have to wonder how long he was in the big house, and how close he was to getting out, had he minded his P's and Q's. 3) I realize the warden didn't want Luke to work on the road after the death of his mother, but come on - did he have to throw him in the hot box for the duration of time until her burial? Sure, it helps establish the warden as a bad-ass, but that seems awfully punitive and counter-productive, considering Luke hadn't done anything. 4) So, Luke's buddies had permission to help themselves to 50 hard-boiled eggs from the prison kitchen in order to facilitate a wager? 5) One of the guards mentions that he's never killed a white man before, yet there aren't any African-Americans in the prison. Since this film is set in the deep South, I'm guessing the prisons were still segregated, but maybe somebody should have explained this?


Rating: Cool Hand Luke is probably Paul Newman's most iconic role, and he does a magnificent job of portraying the troubled rebel without a cause. While younger audiences may find it a bit slow-moving, Cool Hand Luke is - on the surface - a powerful, yet often-funny movie about life in a Southern prison; at a deeper level, it's the tragic story about a radical non-conformist who is unable to find his place in the world. Anyone who hated high school, or worked a bad job will identify with Luke to some degree. Oh, and kudos to George Kennedy for an outstanding performance as the bully with a heart of gold, Dragline. Highly recommended. 10/10 stars.