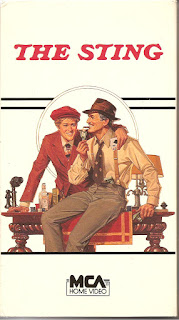 
Synopsis:  Butch and Sundance trade in their stetsons and six-shooters for fedoras and smooth-talking bullshit.


Blurb From the VHS Jacket: "Winner of seven Academy Awards including Best Picture, The Sting is one of the most popular and critically acclaimed films of all time. Set in the 1930s, this intricate comedy caper deals wtih an ambitious small-time crook (Robert Redford) and a veteran con-man (Paul Newman) who seek revenge on the vicious crime lord (Robert Shaw) who murdered on of their gang."


What Did I Learn?: Con artists are warm, intensely loyal, and loveable scamps who spend their time taking real criminals down a peg or two.


Really?: 1) So, Hooker (Redford’s character) has a gambling problem. This is introduced early on, and it never once becomes an issue. 2) Wait – Lonigan’s goons are looking for Hooker, and he’s never played the Big Con before, yet Gondorff (Newman) uses him to gain Lonigan’s trust? That seems really dumb, considering he could have used any number of more experienced con men.   3) I realize Lt. Snyder wants some payback, but doesn’t he have duties back in Joliet? Can he just travel to Chicago and chase down Hooker for what – a week? Maybe longer? 4) Hold on – Snyder beats up Joe Erie (a buddy of Hooker’s from Joliet) in front of all the other con artists, and nobody thinks to ask Joe what he wanted, or why he did that? 5) Holy shit, how much money do these guys spend on this con, and where did they get it? 6) So... we're supposed to believe that Salino (the assassin hired by Lonigan) kills Lonigan's goon, and wastes two days working in a shitty diner when it would have been super-easy to kill Hooker on any number of occasions? 7) Hmm... take a drink every time Hooker winds up getting chased, either by the scummy cop, or by one of Lonigan's hitmen.


Rating: The Sting is my Dad's favourite movie, so I feel the need to tread somewhat lightly in this review. Newman, Redford and Shaw ("Ya follah?") are all quite good, there are a number of memorable moments, and the story is a lot of fun. This film richly deserved its Best Picture Oscar, although I can't give it a perfect score for three reasons: a) there are a few too many "Really?" moments for my taste, b) the chase scenes get old, fast, and c) the Scott Joplin soundtrack will start to grate on you after about half an hour. Couldn't George Roy Hill have chosen some authentic music from the 1930s instead of the Joplin tunes that were released about 25 years earlier? Still, The Sting is highly recommended. 9/10 stars.