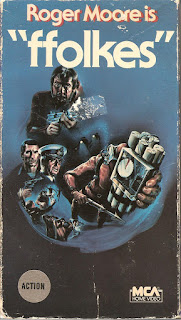 Not Quite a James Bond Movie


Synopsis: It's just like a James Bond movie, except that 007 is a grumpy, cat-loving, bearded misanthrope who does needlepoint in his spare time.


Blurb From the VHS Jacket: “Rufus Excalibur ffolkes is an eccentric underwater saboteur who can’t stand women but who loves cats. Lou Kramer is a psychotic madman who’s determined to blow up the largest oil rig in the North Sea unless the British Government pays him a king’s ransom.”


What Did I Learn?: A vermillion wetsuit is a bit of a liability during a nighttime underwater commando mission.


Really?: 1) Funny how none of the villains are the slightest bit afraid of getting blown to smithereens, even though they're criminals, and not terrorists. 2) I realize ffolkes is supposed to be a misogynistic asshole, but I had a bit of trouble believing he would speak that way to a female Prime Minister, or that she wouldn't simply hang up the phone on him and call in the Americans. 3) It's a good thing Anthony Perkins doesn't push that button, just for shits and giggles, isn't it?


Rating: "ffolkes" is a very offbeat thriller, featuring Roger Moore playing against type, James Mason as a stuffy British admiral, and a nice performance from Anthony Perkins as the psycho (sic) leader of an organized crime ring. "ffolkes" is a bit slow to get going and quite low-budget, but it's a well-written, and often funny little film. 7/10 stars.