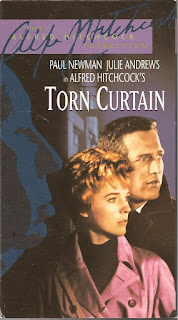 
Blurb From the VHS Jacket: “Paul Newman and Julie Andrews star in this classic tale of international espionage set behind the Iron Curtain.”


What Did I Learn?: Apparently, even if you were wanted by the secret police, it was super-easy to travel from Leipzig to Berlin in mid-1960s East Germany.


You Might Like This Movie If: based on the title, you figure it must be a two-hour-long adorable cat video.


Really?: 1) Um...where are the Soviets? Are we supposed to believe that a well-known American scientist - with a background in designing missiles and guidance systems - could simply defect to East Germany without a thorough interrogation by the KGB? 2) So wait...Armstrong (Newman) asks Sarah (Julie Andrews) to marry him, just before he's set to publicly defect to the Eastern bloc? 3) Um...couldn't Dr. Koska have come up with a better idea for getting Armstrong's attention than tripping him down some stairs? 4) Funny how Armstrong and Sarah get around so well in East Germany, considering neither of them sprechen any Deutsch. And would an entire theatre full of East Germans immediately behave like panicked children if somebody shouted "fire" (in English) and there wasn't any visible smoke or flames?


Rating: Torn Curtain was one of Alfred Hitchcock's least-favourite directing jobs, as he apparently fought with nearly everyone: Newman, the writers, the studio, the musical director, etc... As a method actor, Newman isn't given much to do in this plot-driven thriller, Andrews seems mis-cast as Newman's clueless assistant, neither of them enjoy any chemistry together, and the dialogue is flat. Torn Curtain isn't a great movie by any stretch, but it actually isn't all that bad for an evening's entertainment. 6/10 stars.