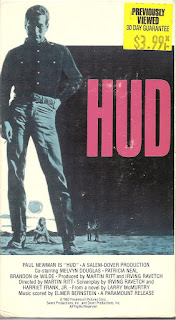 
Synopsis: It's like a really stripped-down version of Dallas, except the Ewings don't have any money, and JR's always drunk and surly.


Blurb From the VHS Jacket: “Paul Newman is Hud, a man at odds with his father, tradition and himself. Hud’s only interests are fighting, drinking, hot-rodding his Cadillac and womanizing.”


What Did I Learn?: West Texas looks pretty bleak and depressing when it's filmed in black-and-white...oh wait, I learned that from The Last Picture Show!


You Might Like This Movie If: You want to see the family ranch become a "Hud Home."


Really?: After his gazillionth barroom brawl, wouldn't the local cantinas simply refuse to serve Hud any booze, and wouldn't the cops eventually throw his ass in jail?

Rating: Paul Newman delivers one of his greatest performances as an often nasty, yet strangely sympathetic antihero in Hud. Apparently, Newman set out to portray the title character as a villain, and was later surprised to find that many young people identified with him, rather than with Hud's virtuous-and-strict father. That's not surprising, as Newman does a magnificent job of fleshing out the character, and the writing is top notch; my jaw dropped, and I experienced a "holy shit" moment when Hud's father remarks: "little by little the look of the country changes because of the men we admire." Highly recommended. 10/10 stars.