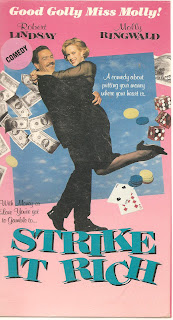 
Blurb From the VHS Jacket: “Ian Bertram (Robert Lindsay) is a brilliant mathematician in a thoroughly boring job, until the day he stumbles across Cary Porter (Molly Ringwald) and falls head-over-heels in love. When Ian proposes marriage, his company President Herbert Dreuther (Sir John Gielgud) suggests the young couple get married in Monte Carlo and spend their honeymoon on his yacht. But things take a downward turn when Dreuther’s yacht fails to arrive, leaving the couple with heavy expenses and a light wallet. When Ian discovers a surefire system of beating the roulette tables, it seems the answer to all their problems and he beings to strike it rich beyond their wildest dreams.”


What Did I Learn?: If you would rather spend your honeymoon in a casino than bang Molly Ringwald, you might have a gambling problem...


Really?: 1) Apparently, Einstein spent a bit of time thinking of mathematical strategies for playing the Roulette table (a completely random game of chance) and concluded: "The only way to beat Roulette is to steal the money when the dealer's not looking." 2) Expensive hotels just love to lend money to guests who can’t afford to pay the bill.


Rating: Strike it Rich is so bad that I couldn’t finish watching it. I like both Molly Ringwald and Robert Lindsay (great as Captain Pellew in the Horatio Hornblower dramatizations), but he’s waaaaay too old for her, they have zero chemistry together, and Molly’s basically a wet blanket through much of the film. I cannot recommend this movie. 4/10 stars.